It’s suggested that 40% of our children’s learning is lost over summer holidays (Forbes, 2020).

The summer holiday debate has been doing the rounds in the last couple of weeks. It seems there’s some very polarising opinions on it too.

As a former teacher, there’s part of me that instantaneously reacts and feels furious at a mention of increasing term time. However, I would be lying if I said that I didn’t get a little lost and bored by week 5 and 6 of the summer holidays.

Gavin Williamson made himself rather unpopular amongst the UK’s teachers with his proposal of a five-term year in 2021. Maintained schools, independents and academies already have the freedom to set their own school term dates so this could be a possibility for them. Although, the Coronorvirus Act 2020 does allow the education secretary to require schools to change their term dates too…(eeek!) 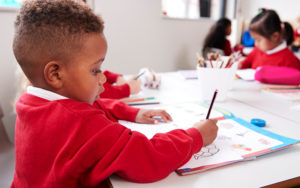 Would a shorter summer holiday really be that bad?

Every parent breathed a very big sigh of relief when schools reopened permanently again. On reopening, I experienced parents with quite opposing feelings about the kids going back to school. Some were itching, begging to get their child back. Others quite enjoyed keeping their ducklings at home.

The same approach can be seen throughout the summer holidays too. Some parents count down the days until the summer begins and others count down until it ends. This is in no way a reflection on their parenting or relationship with their children. In fact, my own parents enrolled us into just about every holiday club, babysitter, relative that would have us. And that was because they both worked full time and couldn’t allow for a 6-week break in the middle of the year (like nearly 70% of the working population).

Surely saving parents precious time, money and energy is enough to consider some kind of adjustment?

Parents aside, I genuinely believe that shortening the summer would be hugely beneficial for student’s development and learning overall. This is especially relevant for our disadvantaged learners as this 6-week period is known amongst many educators as the ‘summer slide’.

In fact, a study conducted in areas of low socioeconomic status in Scotland and the North East of England found that after a summer break of seven weeks, learning loss occurred, or at least stagnation in learning (Front Public Health,  2017).

Why can’t kids just be kids?

In this rapidly changing, technological world we’re bringing our kids up in, I’ve spoken to many parents who are desperate to keep their child’s innocence for as long as possible. And for some families, those long, warm, sunny days filled with salty chips and melted ice cream are the stuff of memories. But there’s a large portion of the nation’s children who won’t be exposed to such enrichment and will spend the majority of their holidays cooped up indoors without any interaction or stimulation other than that of a TV screen or phone.

I’m not suggesting a complete overhaul is needed but there’s some very convincing arguments to consider. As with many educational amendments, the most vulnerable and disadvantaged children are those we need to be considering and also those that would benefit most from an alteration.